You are here: Home / Reflections on Life / Expat Adventures / I dated a Jackass!

Actually I dated a bunch of them

It’s not easy navigating your way through the world of dating. There are some lovely people out there but there are also a bunch of seriously not that cool people and this applies to both men and women. Women can be just as evil. I’ve heard the stories about some pretty crazy behaviour and I’m pretty sure I’ve been the crazy too.

I never wanted to get married, after a teenage love story that went awfully wrong I decided that marriage just wasn’t my thing. Weirdly, the very weekend I met my husband I knew he was the one. In fact, I went to class on Monday and told my friend I’d met the man I’m going to marry. She reminded me that I had said that when I saw her this past weekend. It made me think about how lucky I am to have what I have (yes I’m bragging a little).

So this list post is a little different to the usual ones. It’s a list of the various ways that guys I’ve dated have screwed up. See, I’ve had my fair share of frogs, I was destined to finally find the prince.

There are wayyyy more of these but I don’t want you to start questioning my common sense. Too late? Ahh shucks! We accept the love we think we deserve. Maybe that explains why I’ve had all these bad experiences. Judge for yourself.

I married the guy…. 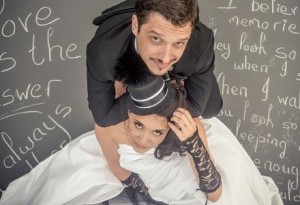 Okay so although this list is a mishmash of all the assholes I’ve ever dated… I hope you get the point. Dating sucks and people can be shit as hell….when you meet the one who makes your heart happy… hold on to them. 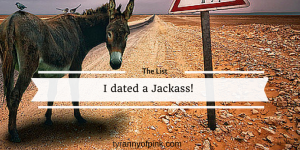