You are here: Home / That time I nearly died / Dear Francis the Stoma, I won’t be sad to see you go!

In September, after a number of complications, I woke up as an Ostomate. If you don’t know what an Ostomate is, don’t worry, neither did I till I was one. (Catch up on that story here)

The definition of an ostomate is a person who has undergone a surgical procedure to create an opening in the body that will be used to discharge wastes.

A person who had cancer and who can no longer expel waste naturally who has a surgery performed to create a port that bodily waste can be removed through is an example of an ostomate. (Source) 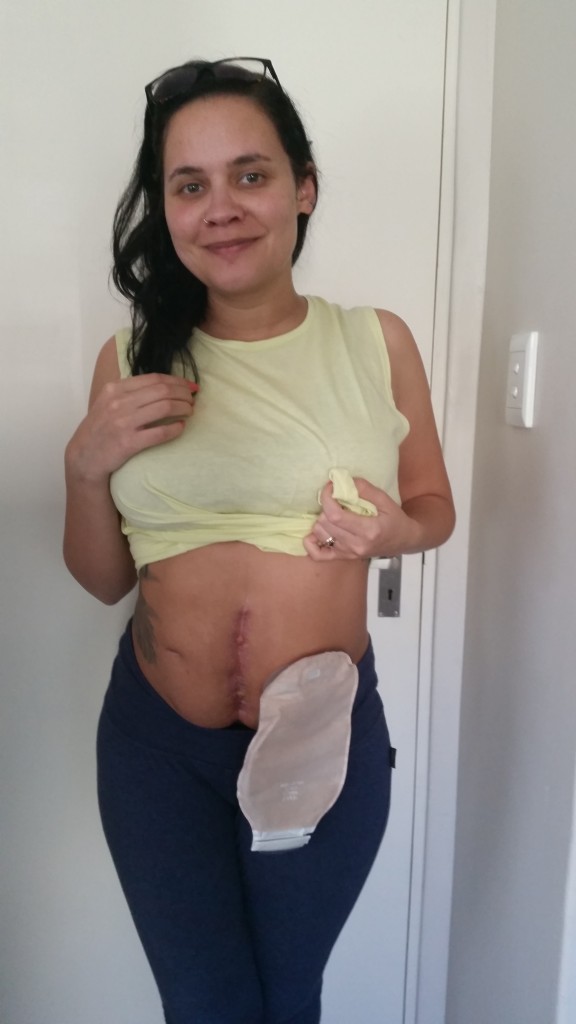 Yup, it was a massive shock to my system. I had about a million things to deal with besides being a new mom and there I found myself with my intestine poking its way out my belly into the big bad world. What the actual FUCK? Yes, it was a huge shock. I was confused (why did this happen to me) and I was sad and I was stressed but I was in hospital so for the first few weeks, I didn’t have to deal with it myself. I had nurses emptying out the bag and changing the bags and it wasn’t all that bad because basically, I just pretended it wasn’t there.

Having to accept this new way of life

Then I came home. There were no more nurses, just lil old me and my intestine still popping out my tummy. I had to face the facts, I had to deal with the reality. This was my life now. At least for the next few months. I’d heard various things from various Doctors ranging between 3 and 6 months and another Doctor who said 9 months before it’s safe to put it back inside. Nothing was certain and I was emotionally a wreck.

I’m the kind of person who tries to always see the glass as half full. So I put my big girl panties on and I decided I would embrace this part of my life. After all, my colon had been so damaged that if I didn’t get a stoma, I’d die. So how bad could it be really when the alternative was literally death. Yeah, suddenly not all that bad right?

Read this: Destigmatising the Colostomy bag

One of the most useful things I did was join a support group on Facebook for people with colostomies. I had so many questions and there was always someone who had an answer. One of the things they suggested was naming your stoma so that it feels less scary. I immediately named mine Francis. I’ve no reason for the choice of name but it has been appropriate. There has been a lot of “Sis man Francis”being thrown around these days.

Finally, the time has come to “go back to normal” 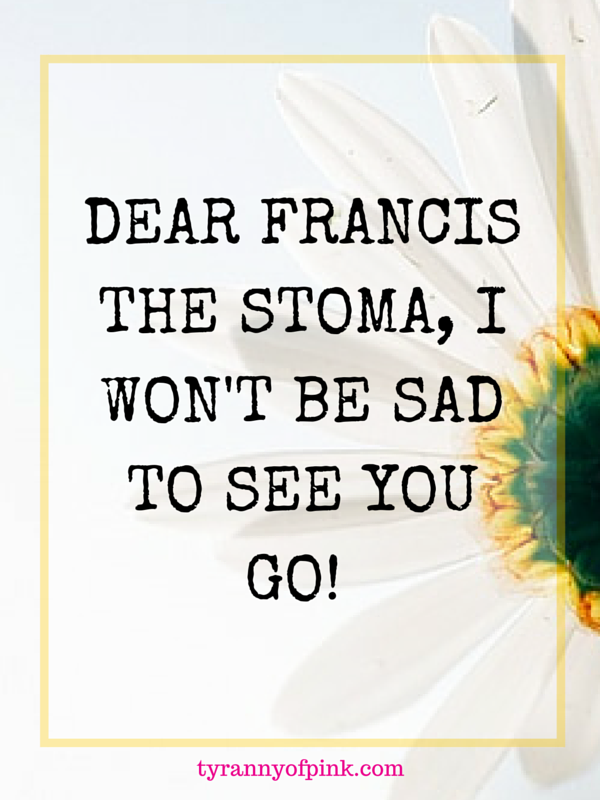 Last week, I met with my new surgeon. A bowel specialist to discuss the day that I thought would never ever arrive. The day I get to put Francis back where he belongs. Hidden inside my tummy. Although the risks are high, there is no world in which this isn’t the choice I would choose. My particular case is even messier than normal because I have Endometriosis plus scar tissue from multiple surgeries but I don’t want to live my life like this.

Although I put on a brave face, it’s tough dealing with living with a colostomy. It expels air loudly and without warning. If you’re with people who don’t know your situation, it can be really embarrassing. I’ve had some really bad experiences too. I can laugh about it now but perhaps worst of all was when my bag accidentally fell off my tummy (when my son kicked on it) and landed poo side up in the reception room of the baby clinic. My T-shirt got covered in poo and I was mortified and humiliated. I share this with you not because I have no shame but because I want people to know the reality.

I’ve also developed a hernia where my belly button used to be. I’m sad when I look at my tummy. It hasn’t been a flat tummy since I was 23 but it was smooth and perfect. I thought I’d get stretch marks from pregnancy but I didn’t, instead I got a huge scar down the front. The surgeon says he’s going to make my new scar prettier. I hope so. My tummy is riddled with marks and scars and is always going to be a constant reminder of what I’ve been through. It makes my heart ache thinking about it but I’m just grateful this is all hopefully nearly over.

Of course if the surgery doesn’t go well, I can wake up with a new stoma (right back where I started) and if things go really wrong, I could die. That is the reality. The Surgeon told me that the only way I can avoid these risks is to not have the surgery. If he had lived even for a week with a bag, he’d know that anyone who can have the reversal, would most likely choose it.

A typical day for me involves changing my bag which is basically glued onto my stomach. I have to manually empty it out several times a day. Yup, I have to open a flap and let the poop that has been collecting in the bag plop on out so that I don’t feel gross. I smile and pretend everything is fine but really, I feel so degraded every time I do this.

A silly thing that I’m looking forward to is wearing my regular clothing. Right now, I’ve resorted to living in T-shirts and tights. My pants rub on my stoma so I basically have to wear elasticized pants all the time. My tops have to be long enough to cover the bag and they have to be loose because no one wants to walk around announcing to the world that there’s a bag living under my clothing.

Tomorrow, I start the first leg of this part of my journey. A colonoscopy to check the condition of my intestine.  A colonoscopy is basically a camera that goes through your intestine and looks at it from the inside. I’ll have one from my bottom and my stoma checking from both ends. I am really dreading this procedure but it moves me one step closer to the big surgery. Cringe for me okay!

Then, on  (still to be confirmed) the 5th of May, I go into hospital for my BIG ASS SURGERY. I will be admitted into hospital and my surgery will take a few hours to do while I’ll be happily dreaming away of days on the beach without a colostomy bag on. If all goes well, I will be in ICU for 3 days before being moved into general ward. I will have an epidural (as if one for child-birth wasn’t bad enough) for the first 3 days and then I’ll be in the general for up to 7 more days after that. All in all I will be in hospital for 7 – 10 days. During that period, i won’t be able to see my son unless I can be wheeled into the car park. Children aren’t allowed in that hospital. That’s probably the part that scares me the most. I wake up with him in my arms every day. I can’t be away from him for even one night, never mind 10 days.   If you’re a mom then you probably understand.

When I get home, I’ve got 6 weeks of recovery to get through. I’ll be cut open from the top of my belly right to the bottom so there is going to be a lot of healing taking place. I’ll probably never be free of the risks of getting another hernia. I’ll never be able to go back to normal really. I’ll be marked for life but that’s okay. I’ll be alive.

I’m afraid of this surgery. After all, I don’t really want to die. Hopefully that won’t happen but that’s the risk of surgery isn’t it. I want my son to remember me and if I die now, chances are he won’t and all he will have of me are stories that other people tell him. I want my baby to always know he’s the most wonderful thing that ever happened to me. I’d go through this all over again just to have him here.

And now, you’re up to date with my upcoming adventures in hospital. Yay! Think of me and send lots of positive thoughts!