You are here: Home / Reflections on Life / Being Resilient / A child of divorce – poor me!

Every night when I go to sleep, I lie there for hours wishing my parents had gotten back together. Sometimes, when I really think about it properly, I even cry a little over the things I’ve missed as a result of their divorce. 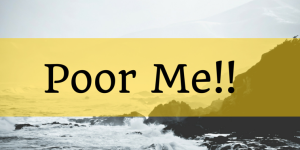 Convinced? I hope not but this is the kind of crap people are still asking me 29 years later.

So many people who think they know better about what a fully functional life should look like think that people should stay together forever regardless of what the situation is really like.

Do I wish my parents could have stayed married? – of course!

Am I thankful every single day that they didn’t? ABSO-FUCKING-LUTELY. Why? Because I can not imagine a scenario worse than a lifetime of parents who just don’t get on. Do I wish they had gotten back together? Not even for a second.


Every day I’m thankful that my mother had the balls to pack her shit together and get out of there. THAT is what shows the strength of a parent. Having the ability to realise when a situation just isn’t a good one and walk away. Just to be clear, it wasn’t easy for her and it wasn’t easy for my dad. It certainly wasn’t easy for me. I was confused, I was upset. I was 3 years old and I didn’t know what was happening.

The older I got however, the more things were explained to me, the clearer everything became and the more it made sense to me… you don’t stay in a marriage that makes you miserable.

I wouldn’t stay in a job that makes me miserable never mind a marriage. 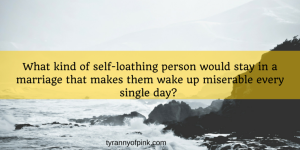 So yes, I understand that divorce is sometimes the best option for everyone. Child or no child. I also understand that it’s hard to walk away when you’re no longer that single young person… and now you bring your baggage with you but I can’t even begin to explain how much they saved me by making the harder choice.

I understand what it takes to walk away because my mother did that. It’s not easy but it’s worth it.

Did I miss out on a huge part of childhood?

No, I really really REALLY did not!

In fact, I had the kind of childhood that I’m pretty sure many would love to have had. A farm filled with horses, weekends away at the seaside, happiness and Sunday lunch surrounded by family and loved ones. I had everything I could have wanted – just without my parents living under the same roof.

If that’s not what a good childhood is all about then yeah, my childhood sucked.

So for those of you who wonder how my childhood was different to yours with your two married parents, here’s a summary of things I missed out on as a child of divorce and the things I didn’t.

Things I missed out on

Things I did not miss out on

In fact, the hardest part of being a child of divorced parents was having to share my Christmas day with both families. A half day here and a half day there. Life could be worse.

What I know for sure 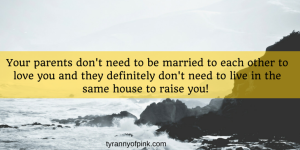 Your parents don’t need to be married to each other to love you. They don’t need to live in the same house to raise you properly. I know that they can be divorced from each other without divorcing you.

My parents, brave and selfless as they were, got their shit together and attended all my school events – together but separate.

They put their differences aside and they acted like parents. Not as two people who used to be married and aren’t anymore but as parents and that is something that makes me very proud.

When I think of my childhood, I know without a doubt that mine was great.

Sure there were times when life wasn’t easy but I could never look back on my life and say I’d be a better person…if only my parents had stayed together.

I am thankful instead, that they had the common sense and the courage to walk away.

After a discussion with a friend about the other side of a happy divorce, I think it’s important to clarify that this experience is probably not the norm. This is my experience and discusses divorce only from the perspective of one person.

I readily acknowledge that divorce can be messy and can cause a lot of damage and hurt and doesn’t always leave everyone smiling on the other end. I don’t want for one second to deny the reality that many people experience through their own personal journey through divorce both as parent and as child. There are always casualties of war and no one ever really comes out without having been affected in some way or other!

So please bare in mind that this is my own personal experience and is not at all intended to undermine the millions of women who choose to stay and sacrifice their own happiness – to do what is best for their children. That in itself is a noble thing, just not something I would have wanted for my own mother.

Given the choice, I would want my parents to have the chance to be happy and clearly being in a marriage together was not the right choice for them.

Previous Post: « There are only two types of people in this world
Next Post: You’ve got this! »