You are here: Home / Reflections on Life / Being Resilient / Death & Grief / Conversations with gramps

Sometime in September, after I had given birth to my son and landed up in ICU after severe complications, my mother walked into my room in the intensive care unit and with one look I knew she was there to break the news to me. The cancer that was eating him alive had finally beaten him. His body was weak, it was no surprise. It hurt but it was also a relief to know his suffering was over.

“More and more, when I single out the person out who inspired me most, I go back to my grandfather. James Earl Jones “

If something seems too good to be true, it usually is. One of the wise things I learnt from my grandfather. There were many of these. He was a serious man but he was also the funniest man I know. Always joking and laughing. I miss his laugh, loud and carefree. He told us many a time about a visit to the cinema where he went to watch a comedy and another cinema goer asked him not to laugh so loudly. He was baffled and asked the man, why come to watch a comedy if you don’t want to laugh. I remember him like that. Always laughing at silly jokes. We’d roll our eyes and say “grandpaaaaaa”and he’d smile. A whale of a lie he’d shout as the whales swam past his house. Water water everywhere and not a drop to drink. Every time he looked out at the sea. It was always the same but every time it made me smile. There are things we remember people for and I’m always going to remember my grandfather for his sense of humour. He loved to tease us, he loved to laugh but he loved knowing we were being sensible about the world.

I was 16 when he decided it was time for me to go on a contraceptive pill. No matter how much I protested, he insisted. What’s the harm he said, let’s rather make sure you’re protected just in case anything happens. It was that kind of thinking that made him different to other grandparents. It was also around that age that he just decided it was time for me to not only start driving but to get a car so he taught me. Just like that and suddenly I was off to get my driver’s license and the next things he’d informed my father I needed a car.

Education, was everything to him. I could be anything I wanted to be, as long as it was educated. There was no way around that one. I wanted to be an actress but nope, not going to happen. Off to University for me. From as far back as I could remember he told me the value of education was in that I’d never have to depend on anyone to take care of me. Educate yourself, get a good job and never owe anyone anything. So I did. On and on and on. I know he was proud of me, he rarely told me so but in every graduation I could see the beaming in his eyes. On the day I graduated with a Master’s degree, I walked up to him ever so proud, expecting a pat on the back and instead he said, right, now on to a PhD. My heart broke. He later explained to me, it was his way of saying he knows that the sky is the limit for me.

When my father died, he asked me if I’m ready to take over the family business. A business he put his heart and soul in to. I felt I let him down by saying no, at 23, I had no interest in taking over a business that I’d never been interested in. My heart broke letting him down but he accepted that it wasn’t the life I wanted. Instead, we sold an empire that he had built out of nothing. 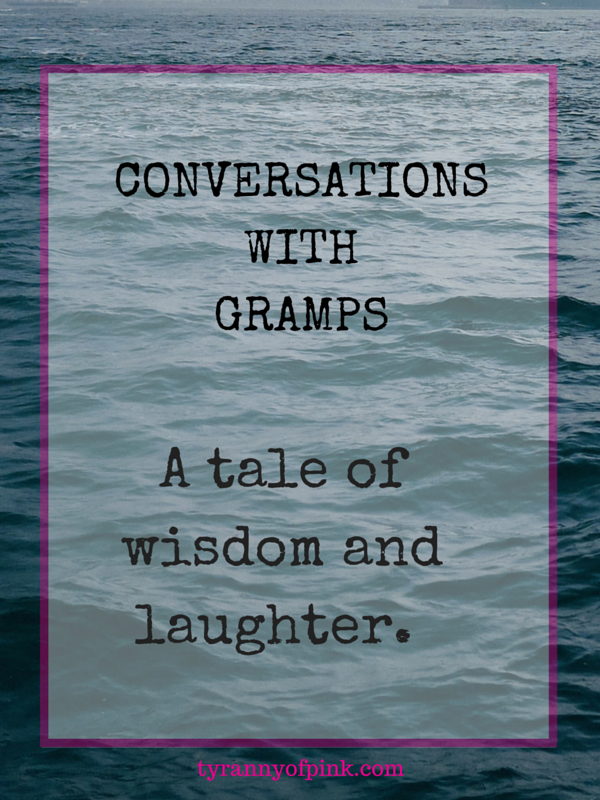 He always told us stories of him as a young man. A very poor and uneducated young man who knew the importance of education but had to drop out of school before he turned 15. A man with so little who amounted to greatness. He climbed mountains that man. He climbed his way out of poverty. As a child, he’d stay behind at his catholic missionary school and work his debt off. The only child staying for the holidays. He paid off his debt. Even at that age he knew, nothing is for free and the importance of working hard. He told us stories all the time of nuns who would tease him and say “Christopher du Pont, a patch on a patch and still a hole through.” That was the extend of his poverty.

My grandfather taught me so much about being financially smart. My favourite of his beloved quotes about money was “watch the pennies and the pounds take care of themselves.” He’d call me up to drill me about my finances all the time and if I mentioned going out for dinner I’d get a three-day lecture about the importance of saving. I am not the kind of person to squander money, in fact, quite the opposite. I don’t believe in spending money I don’t have, I pay my credit card off in full every month and I try not to have any debt that doesn’t add value to my portfolio. In short, he taught me well and yet he still worried that I was wasting money on “extravagant dinners”. That’s just who he was. He always had our best interests at heart. He wanted his family to succeed. He wanted us to be educated, to be self-sufficient and to never depend on anyone else.

I honestly owe so much to this great man who taught me so much of being responsible. He guided me and advised me for all my life. He listened to my troubles when I was sad, he gave me direction when I felt lost. He made me morally strong and value ethics above so much. He taught me the importance of being someone who people can trust, that giving your word means the world and you don’t back down on a promise you’ve made. Even if there is no proof to show for it. He taught me to be a good person and without faltering, I can stand up today and say that this great man, inspired what greatness there might be within me. He is so dearly missed. He will always be so dearly missed. And loved.

It wasn’t just me he inspired, he kept us all in line. Saying things like;

“Failure shall never overcome me, if my determination to succeed is strong enough”- He said that to me on the way to school for four years. Wise words from a wise man – Chris.

At 6am every morning I got “Dani, what time are you going to university?” I used to get “shouldn’t you be at school?”and I was like “Grandpa, it’s holidays!!”- Danicka

Life is infinitely harder without him around. So many days I think of calling him just to chat about politics, the weather, my son and then it hits me that he’s gone and that’s that. Death is so damn finite and that’s what makes it impossible. You know that people can’t live forever but it doesn’t change the pain and sadness of trying to live a life without them. Some people you miss more than others, some people make more of an impact on your life and the decisions you make than others. My grandfather was one of those people. Forever missed. Forever loved.

Previous Post: « Being a mom isn’t just about filling traditional roles of motherhood
Next Post: 7 months with a colostomy and facing a dangerous reversal surgery »