You are here: Home / Reflections on Life / Being You / Authentic Living / The Tyranny of Pink

As women, we are expected to be a certain way and do certain things. Anything outside of that is improper. We need to suck it up and accept that this is how it has “always been” as if that’s some excuse for letting it continue in the same way for all eternity still. You must act like a lady and dress like a lady. You must be the ideal woman. As if there is such a thing.

We are expected to be

be disrespectful to our men

create our own paths

colour outside the lines

The lists could go on….

But the point is that as women, there is so much pressure on us to be a certain way and anything outside of those expectations is getting is wrong. You’re supposed to enjoy being pregnant because that’s what women are meant to do. I’m supposed to be “mumsy” because I’m a mother and even my blog is a shock when it’s not a typical mummy blog. What the fuck is that even? I’m supposed to be girly and innocent and not ever step on the cracks because that’s not what REAL women do. Never miss a beat. Never show your weakness and for gods sake, have dinner ready on time.

I walk in the supermarket and the toy aisles are clearly distinct.

Little boy aisles filled with games and trucks and swords and army men and characters from every cartoon. Heroes everywhere in every form. Fun things.

Little girl aisles. Clearly marked by the over-kill of PINK. PINK everything. Pink dolls, pink kitchen sets, pink tea-cup sets, pink cleaning supplies, pink Barbies, pink hair sets. PINK EVERYTHING. As a little girl – your hero is Barbie. Your dream? A life of being a stereotype. In the kitchen, cooking, cleaning. Without complaint. The perfect wife, mother, cook and corporate “girl-boss” – a term I hate. When men boss they BOSS when women boss they “girl boss” as if somehow having a vagina makes you less of a boss at all.

We say how we feel? What if  we are not okay with settling for pink. For Barbie. For the kitchen? For home? For the title “girl boss” – what if we aren’t all about bubblegum pink and high heels? What then? 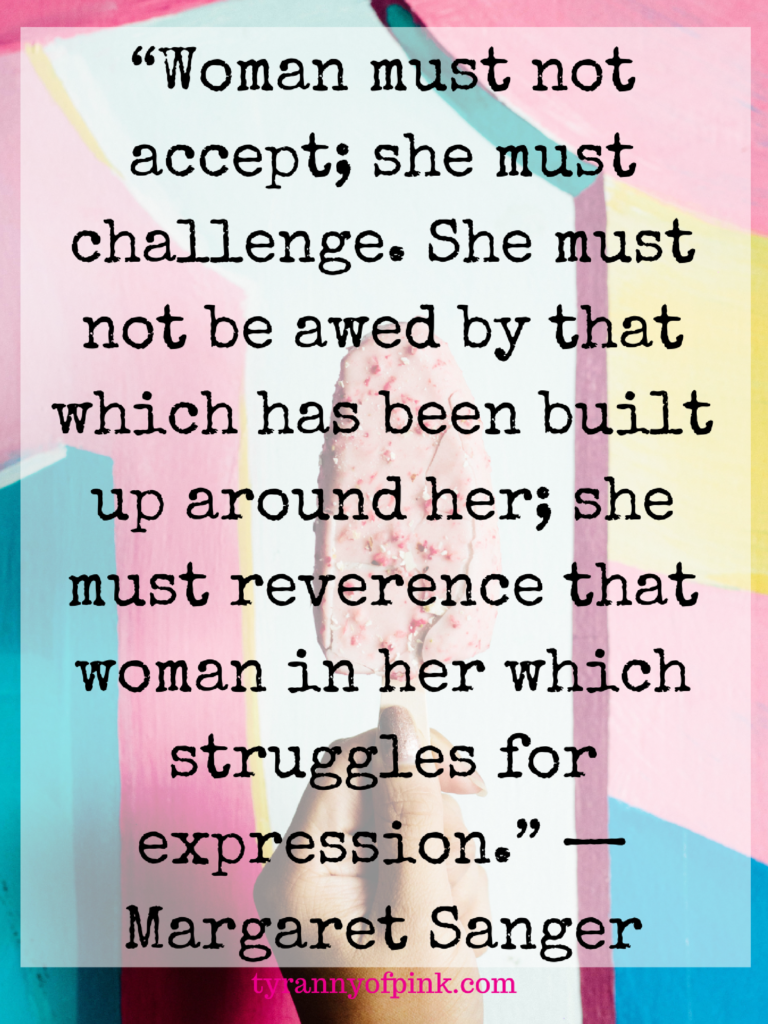 I want my son growing up knowing that it’s okay to like cooking. It’s okay to play with a broom and if he plays with dolls, he might grow up to be a good dad someday. And if he doesn’t want to have kids then that is okay too because I think fuck the rules. Fuck the way things have always been and should be and what we should / would / could do… IF we followed the rules.

I’m tired of rules and a world that tells us how to be and who to be.

Be YOU! Be EMPOWERED! Stand TALL! SPEAK UP!

WHOEVER that is. BE YOURSELF. Always!

[bctt tweet=”The question isn’t who’s going to let me; it’s who is going to stop me. – Ayn Rand #QOTD ” username=”tyrannyofpink”]

Previous Post: « Are we slowly exaggerating ourselves into oblivion?
Next Post: Is your fear of rejection holding you back from living a life you love? »