We all know that feeling. You want to stand up and scream and throw your resignation letter in the face of the boss who has made your life hell because the place you work is killing your soul.

I had a job that I hated. For nearly a year, I woke up in the morning and I cried. Yes, I cried actual tears because I needed to drive for nearly an hour to a place I hated being a part of. The job itself was wonderful, the cause I was a part of was thrilling but the place was filled with negative energy (not in a hippy sort of way just in a dark human being kind of way). I thought that if I stuck it out, it would get better. I convinced myself that I needed to do the job because the young people we worked with did not deserve to be abandoned. I loved working with them, and feeling like I have something positive to contribute towards their future. So I stuck it out.

After 8 months of this feeling of hating my life and every part of waking up every day, I decided this wasn’t the life for me and this was not how I was going to keep living. So one day, I arrived at work with resignation letter in hand (and new job offer under the belt) and I handed it in. My boss was really very understanding about my not wanting to drive that far everyday. We had a good conversation and I walked away feeling like I’d handled things well.

However, after I had left, she talked badly about me to the rest of the company. She made the familiar speech about how I was the cancer in the company. Now I may not be perfect but I can think of few things more awful for a “leader” to say about their employees. She had used this term on nearly everyone that worked there who had resigned and yet it still felt hurtful to hear from my colleagues. We all knew that no matter how well we performed while a part of the company, we would inevitably end up being blamed for the negative culture of the company. Soon after I resigned, 3 key members of the company resigned too. There had been a turnover of over 11 staff members in the two-year period before I had resigned. One position had seen 5 different people take on the same role and resign shortly after. Surely I was not the problem.

It creates a negative working environment when staff members know that management will not take responsibility for the awful environment that exists, finding a scape goat instead. Your workplace should not be something you dread going to every day. It should inspire you. There is no reason in the world why going to work should make you miserable. If it does, then you need to reflect on your life and how you can go about making changes necessary.

It’s never too late to start over. We have only one shot of living a life we love. If the job you’re in doesn’t fulfil you, then go find a new one. Sure it’s scary, it’s tough too. No one is bull-shitting you and telling you it’ll be easy but it’s possible. There is no reason to stay put in a place that makes you miserable. Get out there and find your happy place.

Let me know if you’ve had similar experiences and what you did about it! 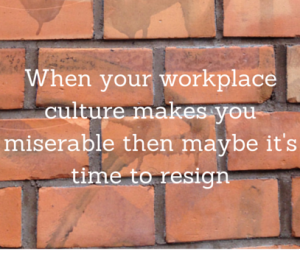 The challenge of being raised as an independent woman in a patriarchal family!

The beauty behind the scars

We interrupt this broadcast for a special announcement!