“The comments we allow our friends to make on our updates, say a lot about our own character. I suggest thinking carefully about what your friends are showing the world about your own personality.”

This statement above is something I posted on Facebook on Monday. I have realised that people will often let their friends (both online and in reality) get away with making statements that are not appropriate even for ones own private thoughts. I think it speaks to your personality if you let people say racist, rude and offensive things to other human beings without telling them that it’s not appropriate.

The comment sparked a varied debate with some agreeing and others disagreeing with me. I don’t think we can truly separate the real world from social media and so this commentary applies to both. Personally, I would not associate myself with a racist person and having “Hitler” on your list of friends sure says something about the way you view the world.

I will never accept people coming into my home and using language that I find offensive. Words used such as “they” when referring to an entire population of people is not going to fly with me and dare say things like “oh but those blacks are different” and a phrase like “I’m not racist, I have many black friends” is hardly something that I can let slide. I don’t tolerate racists and I don’t tolerate racism. This includes all kinds of stereotyping. 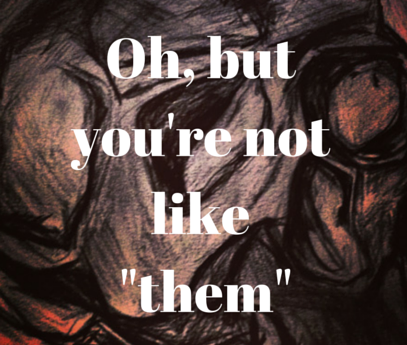 And here’s why; how can you possibly class me or anyone else into an entire group of people who are so defined by their very essence of being mixed. How do you expect everyone to end up with the same taste in food, music, clothing. or the same background and culture?

Being coloured has this stigma. It is associated with so much more than just being mixed race.

It is because people don’t see me as “coloured” that they feel at ease with saying things to me that they expect a person of their race to agree with. I don’t. I will never. And I will never accept you saying something offensive on my social media about anyone based on your prejudices.

If you want to, post it on your own timeline and homepage, then that is something else but perhaps then you should read this post that I wrote about exactly that.

In truth, there have been times in my life when I have let racist comments slide for the sake of not being “that person” again but afterwards, I feel so dirty. I would rather that racist people don’t like me and choose not to associate with me, than to think I agree with them.

What are your thoughts on this?